Finally, this is it, after months of work, tons of corrections to the scenario, three cover versions, the first episode of my first long comic album is about to get out of the dark…
It’s ready to take off, I publish episode 0, the introduction, on September the 7th!

“The End”, it’s the end of one world, one before the Internet and before the IPCC reports, but until now it doesn’t tell us “goodbye”.

It’s also the end of the adventure of the design of this comic for me, and the beginning of another big adventure, the one of its realization. I’m already drawing episode 1 and the others will follow in the coming months depending on my availability. I will publish by episodes, under a free license, self-publishing, on the web and as ebooks. And finally, when all episodes will be ready, it will be time to print!

Until then is a long way, that’s why it’s also the day of another big launch, my Tipeee page launch. You’re invited, you reader, to become a co-producer of Mokatori and the page says more about how and why I do things like that. 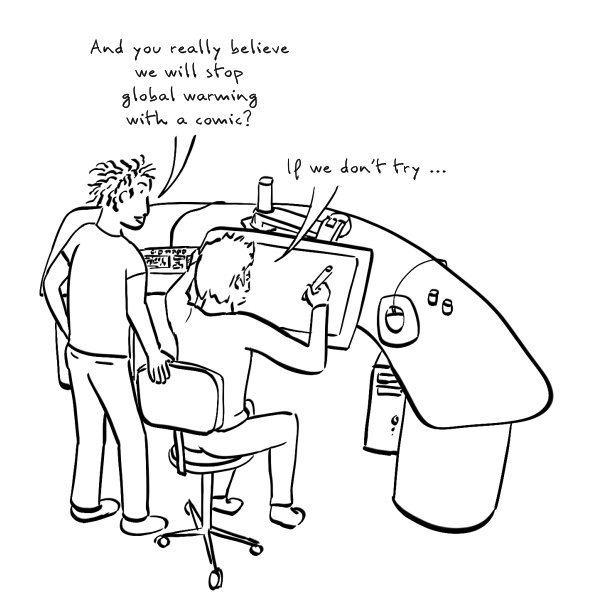 But don’t worry, if you would not miss anything and want to be informed without becoming a co-producer, you can subscribe to my newsletter.

And three weeks, it’s still a long way! To make you wait, here is in preview another illustration which is one of interludes of the comic: Fukushima 2057.